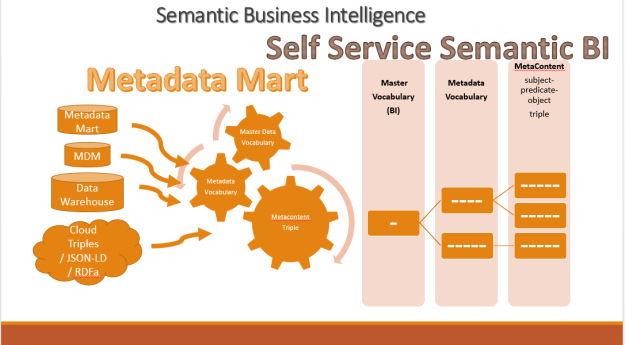 I have spent some time in this for quite a while now and I believe there is a quite a bit of merit in approaching the collection of domain data and column profile data, in regards to the meta-data mart, and organize them in a triple’s fashion

The basis for JSON-LD and  RDFa is the collection of data as a triple. Delving into said deeper

I believe with the proper mapping for the object reference and deriving of the appropriate predicates in the collection of the value we could gain some of the same benefits as well as bringing the web data being “collected, there by linking to source data.

Metadata (metacontent), or more correctly, the vocabularies used to assemble metadata (metacontent) statements, are typically structured according to a standardized concept using a well-defined metadata scheme, including: metadata standards and metadata models. Tools such as controlled vocabularies, taxonomies, thesauri, data dictionaries, and metadata registries can be used to apply further standardization to the metadata. Structural metadata commonality is also of paramount importance in data model development and in database design.

A common example of (guide) metacontent is the bibliographic classification, the subject, the Dewey Decimal class number. There is always an implied statement in any “classification” of some object. To classify an object as, for example, Dewey class number 514 (Topology) (i.e. books having the number 514 on their spine) the implied statement is: “<book><subject heading><514>. This is a subject-predicate-object triple, or more importantly, a class-attribute-value triple. The first two elements of the triple (class, attribute) are pieces of some structural metadata having a defined semantic. The third element is a value, preferably from some controlled vocabulary, some reference (master) data. The combination of the metadata and master data elements results in a statement which is a metacontent statement i.e. “metacontent = metadata + master data”. All these elements can be thought of as “vocabulary”. Both metadata and master data are vocabularies which can be assembled into metacontent statements. “

The MetadataMart serve as the source for both metadata vocabulary and MDM for the Master Data Vocabulary.

For the Master Data Vocabulary consider schema.org which defines most of the schemas we need. Consider the following schema.org Persons Properties of Objects and Predicates:

In essence information from the web applications can be integrated with the dimensional metadata mart, MDM Model and existing Data Warehouses providing lineage for selected raw data from web to Enterprise conformed Dimensions that have gone thru Data Quality processes.

Please let me know your thoughts.